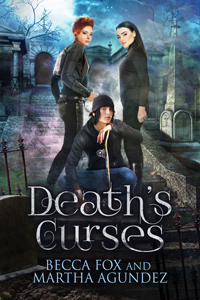 After one screw up too many, Esmeralda Barnes is shipped off to Seattle to start her first semester of college while living under the strict guardianship of her great aunt. She’s prepared to serve her time in simmering silence when she meets Charlie Campbell, the only person worth talking to at the tiny community college she’s being forced to attend. His efforts to scare her away don’t work, not even when he lefts it slip that he has a psychic twin sister who helps their uncle—a police detective—solve murders. As the former member of a gang, Esmer’s confident she’s tough enough to take anything he throws at her in stride.

Then she has a near death experience. And Charlie is the first person on the scene. It turns out, his sister isn’t psychic but she does have a special connection to Death. She and Charlie both. So maybe this friendship will take a little more work than Esmer originally thought. But hey, it’s better than the gang. Even after being pulled into a string of grisly murder investigations, running with people possessing supernatural abilities, and dealing with the very real presence of a minor goddess, Esmer’s pretty sure hanging with Charlie is better than being back with the gang. Yep, pretty damn sure.

“…a perfectly even mix of romance, crime, and fantasy.”

“I am so thrilled I was able to beta read this book! The character development was fantastic, and I loved this take on Death. So excited to read it again!”

“I enjoyed this book with its well-paced story line and likable characters. Some surprises along the way keep the book interesting.”

“I laughed and cried with the main characters as they struggled with everything thrown at them, and while the ending was sad, it was also beautiful.”